Get a fast & free estimate today. 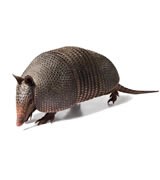 Armadillos are common in Florida and are usually classified as pests because their mischievous ways cause many issues for homes and yards. Armadillos mean no harm to humans, but unfortunately, because of their digging nature, they create large burrows and small holes all over the yard. Armadillos also create potential structural damage from their burrowing.

Because armadillos are mostly active at night, it’s hard for us to catch them in the act of using their sharp claws and snouts to tear into yards in search of food. Armadillos are typically found in dense bushes, forests, and woodlands, but commonly enter onto people’s property to feast on worms, spiders, beetles, ants, and other insects. Other things armadillos hope to find for a meal include vegetables and fruit, as well as snakes frogs, and lizards.

Damage to Your Home and Yard

Armadillos have to dig to get their meals, which means their sharp claws and strong legs tear up the ground in the process, ruining many people’s lawns and gardens. You will also find them digging burrows under trees, as well as beneath sheds, driveways, homes, and foundations, which are used for traveling and as an escape route. If the tunnels go unnoticed for a long time and are not adequately corrected, they could create significant destruction to your foundation, which ends up costing you a lot of money in repairs.

Leprosy, also known as Hansen’s disease is known to be carried by armadillos, although the transmission of the disease from the armored shell critter to humans is rare. Armadillos also carry parasites such as tapeworms and bacteria like salmonella, which can be spread through fecal matter.

The trapping and removal of an armadillo can be tricky because, although trapping is legal in Florida, you cannot remove or transport them. Laws such as this are made to keep invasive species from spreading outside of the immediate area where the animal was caught. Many times residents try trapping armadillos on their own but are unsuccessful. It takes more than just laying a trap down and waiting for an armadillo to walk in. Professional wildlife experts have success in trapping because they understand the animal’s behavior, along with the proper techniques on how to steer the armadillo into the trap.

Rely on the Experts

Having armadillos on your property doesn’t put you in immediate danger, but you still want to call the experts at Critter Control® of Tallahassee to have them removed. Their destructive behavior can cause you both frustration and financial hardships. Call us today to schedule your free consultation.